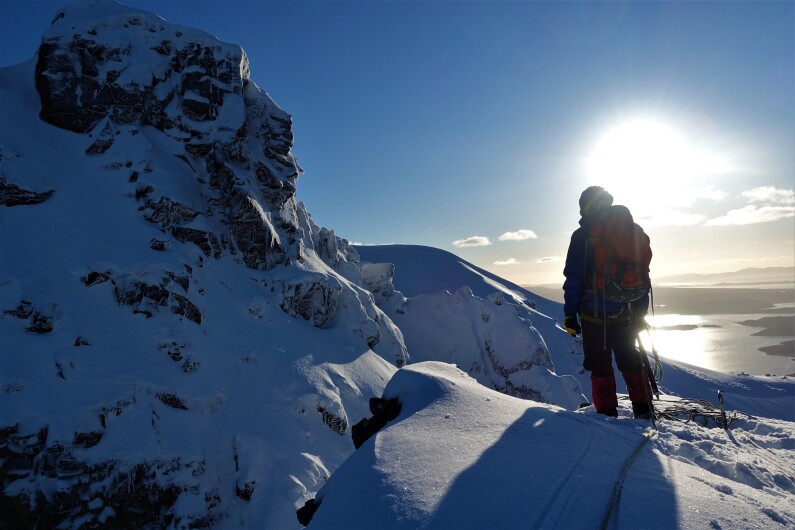 There have been several snowfalls on our local Torridon and Glen Carron mountains as I write this in the last few days of October. It's been a strange summer, what with the Covid restrictions, but we are surviving as a business and have been truly grateful to all the excellent people who joined us on the mountains & sea of Wester Ross & Skye. My thoughts are now focussed on all things snowy and the upcoming winter mountain and skiing season. All of our winter mountain courses and trips are running and, for the first time, we'll be in the Arctic in the middle of february 2021 on a sea kayak expedition beneath the Aurora Borealis.

As anticipation builds, and ski edges, ice axes and crampons are sharpened, I am reminded of probably the best 4 days I've had in the Scottish winter mountains in many seasons. Conditions conspired, over several weeks of storms, to produce consistent snow base in late March 2020 allowing a chance to climb, ski and snowhole on consecutive days from the 20th to 23rd March. Scotland often offers great winter climbing and backcountry ski conditions but it is a rare thing to be able to combine all the best activity in multiple locations within the same week! 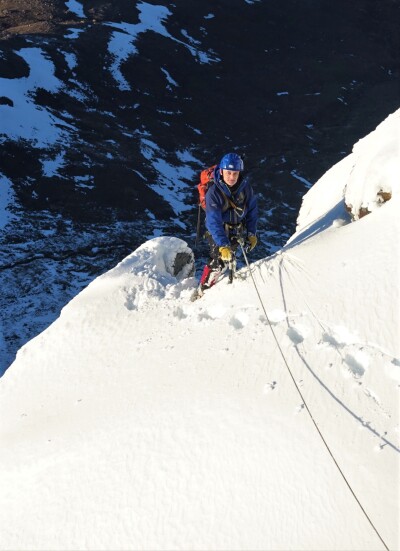 In the Torridon mountains, under a perfect blue sky, I headed up the steep SW slopes of Mullach an Rathain with my client Laurent. From Paris, Laurent had made Scotland his home for many years and was full of enthusiasm for a technical ascent of the snow and ice covered Northern Pinnacles of Mullach an Rathain. There's no warm up as the ascent is relentless from the start behind the Torridon youth hostel and up past Slugach. A couple of hours later we crossed the ridge and descended a short gully in to Coire Dhearg prior to traversing into the base of the pinnacles in Glas-Toll a Bothan. The ascent to the ridge below the pinnacles on grade 1 ground was hard going in deep snow and occasional crust. Having gained the main ridge we were presented with the most amazing sight as we gazed up to the snow fluted pinnacles. With the depth of snow and the wind carved cornices it could easily have been an Alpine or Himalayan vista! Conditions were perfect. The sky remained clear with not a breath of wind and the temperature was holding at minus 8. It was one of those days in a million where, for once, there was no pressure to rush to keep ahead of the weather. After an hour or so of climbing we gained the summit of Mullach an Rathain and the sight of distant snow covered peaks on the Isle of Skye and the Outer Hebrides. The sun was by now setting so a descent was made down a steep gully to the SW of the summit. A day to remember. 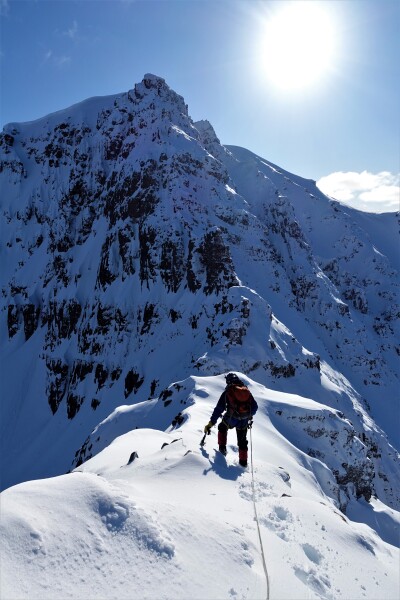 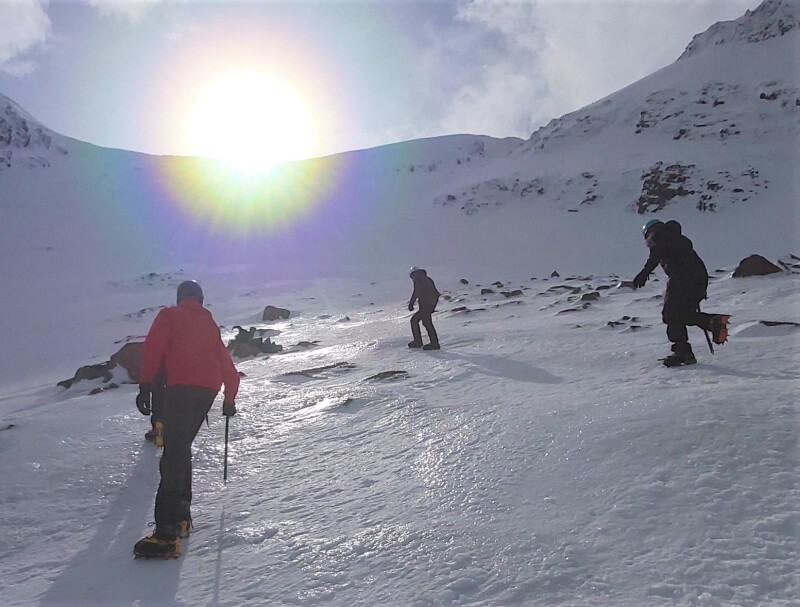 In contrast, on the following day, I found myself wading up through snow in the Northern corries of the Cairngorm national park. Lewis, Nell , Patrick and Bethany, had joined me for a winter skills weekend and we were heading up into Coire an t-Sneachda to spend the night in a snowhole. It was nice and cold at about minus 5  at 3000 feet though high winds on the plateau meant that we were seeking shelter at the lower altitude of the coire. An hour and a half of digging produced a large, comfortable snowhole and we all settled in for a warm night in our sleeping bags. There's something unique and quite special about staying up high on the mountain when all the day trippers have gone down. Strolling about outside the snowhole in the dark allowed some superb star gazing while appreciating a warm mug of tea. After nearly 11 hours in bed we arose to a beautiful day with light winds and clear skies. The group, having experienced a night out on expedition, were now ready for a day of winter skills. After a short traverse of the coire we dumped our rucsacs and spent some time practising the important movement skills involved in using crampons. A nice safe location, offering bulging ice, was the perfect confidence booster allowing people to understand the ins and outs of using these ice tools. Having removed the crampons we spent some time sliding down the nearby snow slope going through the movements of ice axe arrest and understanding what to do in the event of a slide on frozen snow. A short ascent took us up onto the Cairngorm plateau and back down into the bowl of Coire Cas for some avalanche avoidance training. After cutting some snow pits into a safe slope we examined the varying snow types, firmness, bonding and inconsistencies. Using a variety of methods the group was able to release some small slabs making a good start towards understanding what to look for on future winter mountain trips. Tired but happy we all descended after a very packed 24 hours and some great experience under the belt. 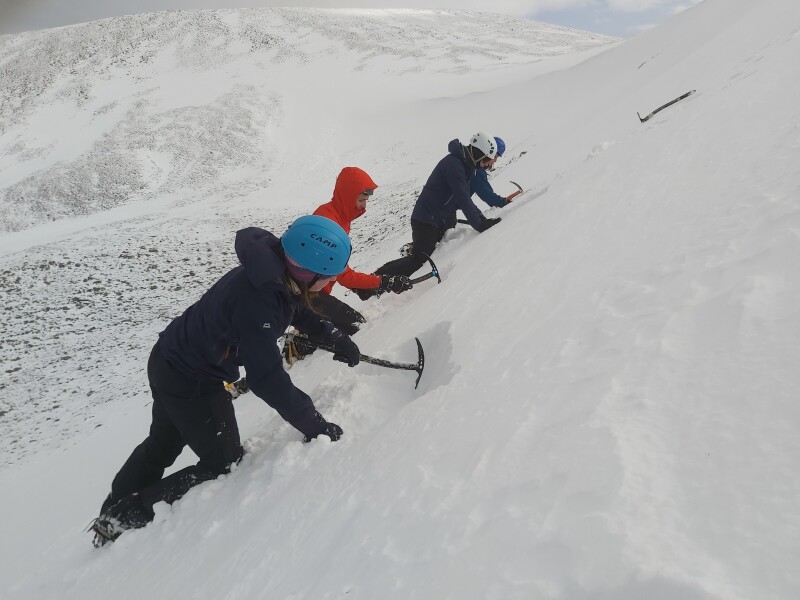 This was a day off for me but, as it turned out, not a day off the mountain. The weather was holding and a chance to ski to the summit of the Ben Wyvis ridge was too good to miss. Just 40 min from my house found me and trusty Border Collie, Charlie, heading up the Allt a Bhealaich Mhoir towards Coire na Feithe Riabhaich. Before getting into the coire I was able to clip into my skis at 400 metres of altitude. Having stuck the skins to the base of the skis we made fast progress uphill on a deserted mountainside. This side of Ben Wyvis is wonderfully remote and our only company was provided by the abundant arctic mountain hares. At the summit the flatter lands of Inverness to the east were quite hard to make out though the snow covered panoramas  west to an Teallach and the Sutherland peaks were jaw dropping. After the hard work of skiing uphill I was now faced with a  nice long ski down on hard packed snow. After weeks of high winds, hailstones, freeze thaw and snow, the snowpack could not have been better. Easy to ski on, full coverage ( none of the usual Scottish rock hopping! ) and minimal avalanche risk. Ahead of me was a 5km descent on skis. A month earlier I'd managed the same ski descent for nearly 8km. These distances are not huge by alpine standards but represent a quality descent in Scotland. 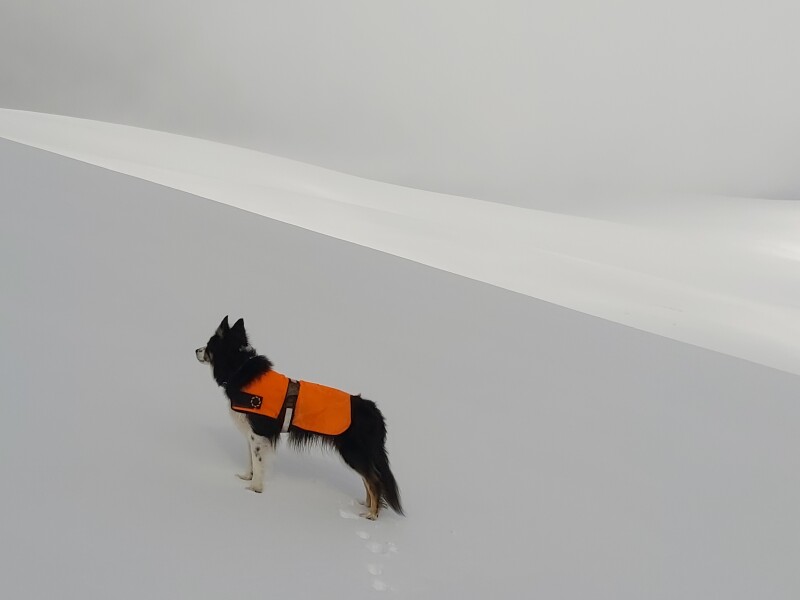 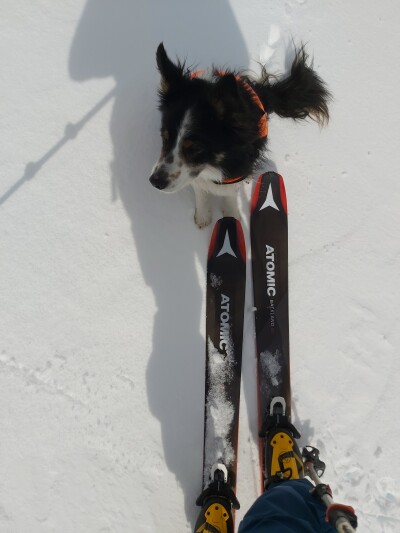 Over just four days last winter, the mountain weather relented enough to allow sunny, snowy climbing, snowholing and ski mountaineering in Scotland's winter mountain playground. Of course, we were busy every week last winter all over the mountains. The 20th -23 March was memorable for its variety of activity and locations and a great example of what's possible in our mountains. See you this winter!